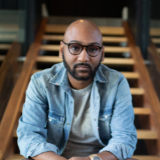 “Well-versed versatility” how better to describe the sound of Hilton ‘Deuce’ Wright II. The 2x Billboard #1, RIAA platinum & gold certified producer, songwriter, and composer embraces the perfect blend of what has been, is and will forever be amazing in music. To date, Hilton has had the great fortune of producing & writing for artists such as: Big Sean, Mike Posner, Sofia Reyes, Drake, Faith Evans, and the cast of the hit abc TV show black•ish on the song “Juneteenth” performed in the Season 4 premiere, earning it a 2019 Guild of Music Supervisors Award. In addition, he’s also had the opportunity to score advertisements for such major corporations as Ford, Wal-Mart, Jeep and Corona beer. In 2020, Hilton launched Seven15 Music, a new music company that serves as a creative outlet for his collaborations with artists across all genres.