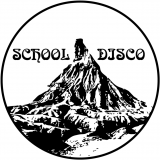 School Disco was formed in 2016 by Rory Lethbridge, Troy Holt, and Laur Underwood. Starting out the band relentlessly played Plymouth venues The Underground and The Junction which helped them forge their raw psych sound and DIY ethos. In late 2019 they released their self-titled debut album via Indie labels, Hot Wax Records, Kraut-Pop!, and Copper Feast Records. This led to them playing shows in Europe as well as selling out a number of shows around the UK. Drummer Laur Underwood decided to leave the band in early 2020. Remaining members Rory and Troy recorded their follow-up album in the summer of 2020 in the middle of the Covid-19 pandemic. Shortly after drummer Luke Shaw Joined the band. Expect an announcement about their 2nd album imminently.